Well over 20 million people are currently downward-dogging it across the entire U.S. in an attempt to gain the many health benefits associated with yoga. To name a few of these benefits from yoga practice:

Scientific studies have also shown that yoga can improve respiration, heart rate, and metabolism plus it helps reduce pain. In spite of all the benefits this doesn’t mean that yoga, if and when performed incorrectly, can’t also cause injury or harm. 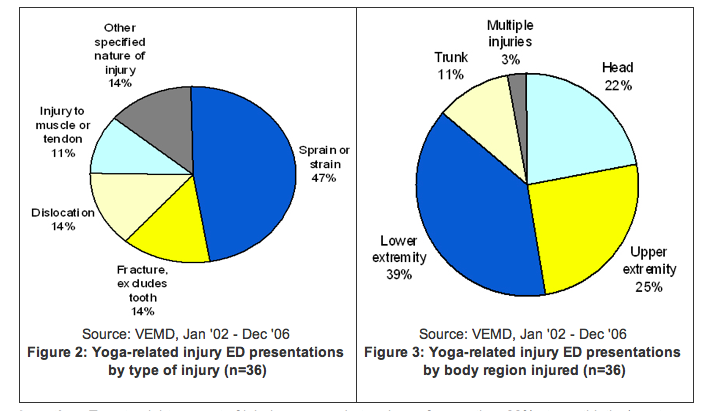 Although most injuries resulting from yoga practice aren’t severe and often go unreported, more serious issues can and do occur occasionally. This includes strains and sprains, fractures, dislocations, and, in rare cases, bone spurs, sciatic nerve problems, and even stroke. But according to yoga trainers, fitness instructors, personal trainers and other  experts, injuries can happen at any time, in any sport or exercise regime, even walking down the sidewalk, although debilitating and life threatening injuries are extremely rare.

With yoga practice, most common injuries develop gradually over years, and are generally a result of consistent over-stretching and/or misalignment. When engaging any physical activity, the safest approach to stay in touch with your body to avoid overdoing it. And with yoga, proper guidance and instruction is necessary to learn how to practice the asanas (poses) correctly and safely.

Areas of most concern when practicing yoga asana…

Wrists: Leverage is all important when it comes to the wrists. Don’t place all of the body’s weight on the wrists when the hands are on the mat as that can lead to both muscle and joint injuries. When practicing any asana where weight is placed on the hands (e.g.; downward dog, cat/cow), distribute the body’s weight through both your hands by spreading them so that they are in line with the shoulders and then press through the fingers. In downward dog (Adho Mukha Svanasana), push the hips back to decrease the angle of the wrists to the floor slightly. In arm balances, such as crow pose (Kakasana), check to make sure your elbows are stacked directly over the wrists.

Elbows: Joint pain in the elbows can result from bending them out to the sides in asanas like the four limbed staff pose (Chaturanga). Because it’s easier to execute some students tend to lower themselves down with outward-pointing elbowsand this will stress the joint (plus it puts undue stresses on the wrists). When bending the elbows in asana (especially plank or Chaturanga), keep the elbows tucked in alongside the ribs as you bend them, and make sure the elbows’ creases remain  facing forward.

Shoulders: Resist the temptation to shrug. By raising the shoulders up toward the ears (e.g; moving into upward dog), you’ll stop using the supporting muscles in your arms, shoulders, and neck. Shrugging also compresses the shoulders, which can also cause muscle injuries. Beware of over-extending or over-stretching it’s relatively easy to injure the shoulder girdle or rotator cuff (even dislocate the joint). Focus on keeping the shoulders held back and down away from the ears.

Ribs: Twists work great for releasing tension, but if done improperly they can easily be overextended and bruise the intercostals (the muscles in between the ribs). Lengthen your torso upwards through the spine before and during twisting. Imagine a cord attached to the crown of your head that is gently pulling you up toward the celestial space. No matter how flexible you feel you are, twist only to the point of feeling the stretch but not beyond it.

Lower back: Lower back pain is the most frequently reported yoga injury, and most certified teachers suspect that it’s the result of “rounding through the spine” in poses like forward folds and downward dog. This unnatural rounding causes the spine to bend the opposite way that it’s meant to, which can lead disc problems. This can also be the cause of that achy feeling post-session. Before engaging any bending poses, imagine lengthening your spine up and away from the hips, this will help to avoid rounding. If your hamstrings are too tight, try bending the knees slightly in poses like forward folds and downward dog.

Hamstrings: As a result of spending too much time sitting in front of the computer, in class, or driving a car, many of us have tight hamstrings, so it’s easy to pull or over-stretch them in poses like forward bends. Downward dog and lunges are great ways to stretch the hamstrings (just remember to go slowly, work at your own pace and don’t overdo it). If you have any kind of hamstring injury, temporarily lay off poses that extend through the back of the body and legs until the injury heals.

Hips: When practicing warrior poses, splits and wide-legged forward folds it’s easy to over-extend the hips’ range of motion in, which in some cases might even tear the muscles of the inner groin or inner thighs. Proper form insures that the toes are pointed forward when attempting any pose where the hips are squared off in the same direction (envision warrior I).

Knees: Knee problems can plague both students and even experienced yogis well after the session is over. The most common causes of knee pain are the cross-legged positions (Padmasana and Sukhasana, Flexibility needs to begin with the hips first; if the hips are tight in asana, the knees will be the first to feel pain or tension. Placing a yoga block or rolled-up blanket under the knees in cross-legged positions generally helps to reduce strain.

Neck: Head stands (Sirsasana) and shoulder stands (Sarvangasana) can be the worst culprits for neck pain or injury. Repeatedly and/or incorrectly placing pressure on the neck in poses such as shoulder stand and headstand can compress the neck and put undue pressure on the cervical vertebrae, resulting in joint issues and a loss of neck flexion in some cases. It would be best to avoid full inversions altogether if you have chronic neck or shoulder issues. It is very important to remember not to jerk the head once you’re up in the pose, because it can destabilize the body and cause a fall.

*Stay tuned for part 2 where some practical guidelines to avoid injury will be discussed.