Approaches to the True Goal of Yoga (Part 3)

Most respected Western publishers acknowledge authentic, traditional yoga, this is quite unlike many of the so-called modern and highly competitive yoga teachers and yoga schools.

The following definition of yoga is excerpted from Funk & Wagnalls New Encyclopedia: YOGA (Skt. yuga, “yoke”), one of the six classic systems of Hindu philosophy, distinguished from the others by the marvels of bodily control and the magical powers ascribed to its advanced devotees. Yoga affirms the doctrine that through the practice of certain disciplines one may achieve liberation from the limitations of flesh, the delusions of sense, and the pitfalls of thought and thus attain union with the object of knowledge. Such union, according to the doctrine, is the only true way of knowing. For most Yogi (those who practice Yoga), the object of knowledge is the universal spirit Brahma. A minority of atheistic Yogi seek perfect self-knowledge instead of knowledge of God….

There are currently two main perceptions of yoga which have recently shifted a great deal in the past century, particularly the past couple decades. Most of this is due to changes made in the Western hemisphere, particularly in the United States, although these shifts are not solely an American phenomenon.

The gist of these shifts can be summarized in two perspectives, one of which is modern and false, and the other of which is ancient and true.

Unfortunately, the false view that Yoga is primarily a physical exercise program is now the dominant viewpoint. This false view is spreading through many institutions, classes, teachers, books, magazines, and then on to millions of students of modern Yoga. These students often have little or no knowledge (or interest) in the spiritual goals of ancient, authentic, traditional yoga and yoga Meditation. 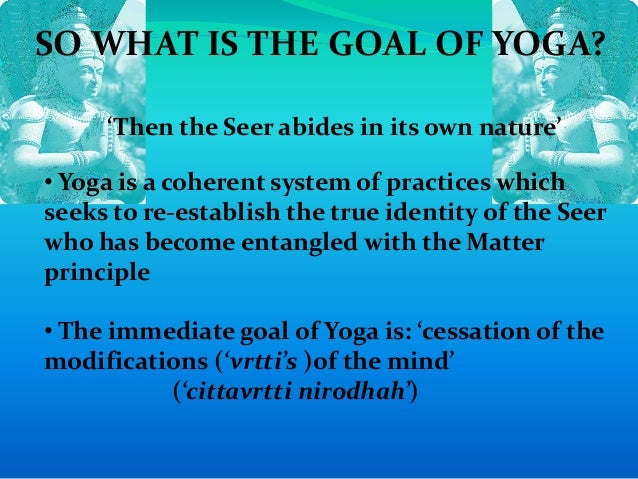 To understand the recent “devolution” that asserts yoga is only a physical exercise program is an essential step for the modern seeker of authentic Yoga.

Using a common Christian point of view as an example of this devolution; many Christians are of the belief that Yoga is merely attaining and maintaining a higher degree of physical fitness. This is as false as saying that Christian communion is merely drinking wine and eating bread with a meal or that baptism is as simple as taking a shower or bath. Remember, the goal of Yoga is Yoga.

This article will close with another definition of yoga from the Columbia Encyclopedia (Sixth Edition, 2001-07) – Yoga: [Skt. = union]: A general term for spiritual disciplines in Hinduism, Buddhism, and throughout South Asia that are directed toward attaining a higher consciousness and liberation from ignorance, suffering, and rebirth. More specifically it is the name of one of the six orthodox systems of Hindu philosophy. Both Vedic and Buddhist literature discuss the doctrines of wandering ascetics in ancient India who practiced various kinds of austerities and meditation. Also, it’s the basic text of a yoga philosophical school; the Yoga Sutras of Patañjali (2nd cent. B.C.), being a systematization of one of these older traditions.

Stay tuned, this series will continue – coming up next; “Approaches to the True Goal of Yoga (Part 4).”