Approaches to the True Goal of Yoga (Part 10)

Yoga and money – Is it wrong to use the subtle methods and powers of yoga as a money making technique?

We don’t have to look far to find a seminar about making money with Yoga. If calling yoga a fitness program, physical therapy or medical treatment isn’t already over the top, it has now also become common to promote yoga seminars and books in respect to yoga being a money making technique, especially here in the West. These so-called “yoga” promoters oftentimes don't openly proclaim their instructions as a means for making money, but instead, they commonly use the terms like prosperity, success, abundance or affluence. They insinuate that with their guidance the student or practitioner will attract those attributes to themselves.

This isn’t referring to teachers that charge money for training students and teaching classes. That is an entirely different matter. This is talking about intentionally using the subtle methods and powers of yoga to generate monetary wealth or to cause riches to come their way. The fruits of practicing yoga come naturally to sincere students as a byproduct of yoga. However, to conduct seminars on how to channel genuine convictions and practices into producing financial wealth is contrary to the ultimate goals of true yoga practice. 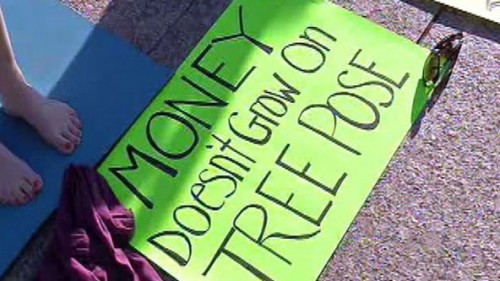 It has been said (Joseph Goebbels), “If you tell a lie big enough and keep repeating it, people will eventually come to believe it.”

Be careful what you choose to believe!

"Yoga is a moneymaking technique.”

It doesn't take a great amount of reflection to see that this statement is a reframing of attachment, hedonism and/or greed, which yoga would have us see as being obstacles to spiritual practice, rather than goals to be attained.

There is a commonly accepted assertion that teachers must meet students where they are. Proper instruction is the epitome of that process, while on the other hand; greedy teachers provide well packaged and marketed seminars to greedy students. They promote the use of “yoga” as a vehicle to make money. By doing this, the seekers are misled, receiving a form of pseudo-validation for their inner (or subconscious) longings for external pleasure. This is not to suggest that yoga should have absolutely nothing to do with any acceptable moneymaking propositions or that aspiring yogis should live in abject poverty. It is simply a result of confusing goals and methods.

Yoga is not a moneymaking technique, nor was it ever meant to be. Any use of yoga for such a purpose is a corruption of true yoga practice and devolution of authentic yoga.

Pandit Rajmani Tigunait, the head of the Himalayan Institute of the USA writes in an article entitled “Real Yoga” that:

"Yoga has become the health and fitness system of choice. This is odd because it is the mind – not the body – that is the main target of all genuine Yoga practices …. To regard Yoga primarily as a set of practices for increasing strength and flexibility while calming the nervous system is to mistake the husk for the kernel.”

Stay tuned, this series will continue – coming up next; “Approaches to the True Goal of Yoga (Part 11).” This next blog article will discuss the commingling of yoga and fitness programs and the resulting consequences.