This article is the forth of a five part series based on this post: The Eight Limbs of Yoga (Part 1 – Yama) 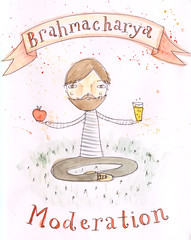 The forth of the five Yamas is Brahmacharya – a Sanskrit term that translates into English as “behavior that leads to Brahman”. The word brahmacharya stems literally from two root words – Brahma, (shortened from Brahman), represents the absolute, eternal, supreme God-head. (As opposed to “Brahmā”, the deity in the Hindu triad responsible for creation), and “Charya”, which means “to follow”. So Bramacharya is generally translated as activity, a mode of behavior or a “virtuous” way of life, i.e.; a lifestyle adopted to enable one to attain the ultimate reality.

Brahmacharya dictates the behavior and lifestyle of students and practitioners of Patanjali’s “classical” Yoga (Raja Yoga). Patanjali says of Brahmacharya: “When walking in the awareness of Brahmacharya (the highest reality) is firmly established, then a great strength, capacity, or “virya” (vitality) is acquired.” (Yoga Sutras 2.38 – Brahmacharya pratisthayam virya labhah).

Brahmacharya brings virya by recognizing (and remembering) the highest and purest energy or force of reality, then that energy is not dissipated. Because it is not dissipated, it seems as if it’s acquired, attained, or gained and this keeps growing. Although we appear to gain virya, which is strength, vigor, vitality, and courage, virya is actually an inherent aspect of our subtler nature, which we have never been without.

Most often celibacy is considered to be the primary practice of Brahmacharya. However, celibacy isn’t the cause, instead it’s the effect. The practice, or cause, is of constant remembering of the highest reality, absolute truth, the divine, or the presence of God (Brahman). This very recognition and remembrance is the cause, and celibacy is the inevitable result. Since the end result might be so visible when observing a spiritual person, or practicing yogi, we tend to mistakenly reverse cause and effect, and imitate what we see on the surface and try to practice, starting with the restraint of sensual urges. Once again, the practice of Brahmacharya is focused on walking in the awareness of the highest reality, absolute reality, remembering the divine, or practicing the presence of God. When the yogi reaches the point where remembrance of the Divine is seamless all sexual urges drop away by themselves along with other primitive urges and desires.

The practice called Brahmacharya, does not necessarily mean total or absolute abstinence from sex as it is often mistakenly translated. The word literally translates as “resting in Brahman,” or “cultivating awareness of the Absolute Divine Reality”. The positive effect of this practice is that the senses are not so easily distracted. Therefore, the regulation and control of the senses is the natural outcome of the yogi’s resolute practice of remembrance of Truth. It is definitely not a case of a forced restraint of the sexual urge, or of any of the other sensory desires.

Yoga recognizes two paths in regard to Bramacharya; the path of renunciation, and the path of worldly (or family) life. In one (renunciation) there is a gradual progression to the complete abstinence from sex, and in the other (family life) there is wise and intentional regulation of the sex life. Both are recognized by most schools of yoga as valid paths.

In summary: The issue of balancing sex and sadhana (spiritual practices) is very practical. Regardless of one’s background, especially with such a diversity of peoples, societies, and cultures, it should be self-evident that a poorly regulated sex life can (and often does) lead to external problems in life, as well as internal anxieties. A well-balanced, healthy sex life leaves one with peace of mind and mental/emotional stability. That peace and stability, while not directly causing meditation, allows a stability and provides a fertile ground from which meditation can more easily arise, greatly assisting us in cultivation of our awareness of the Divine (Bramacharya).

Stay tuned, coming up next: The Five Yamas (Part 5 – Aparigraha)