The Kleshas (afflictions of the mind) 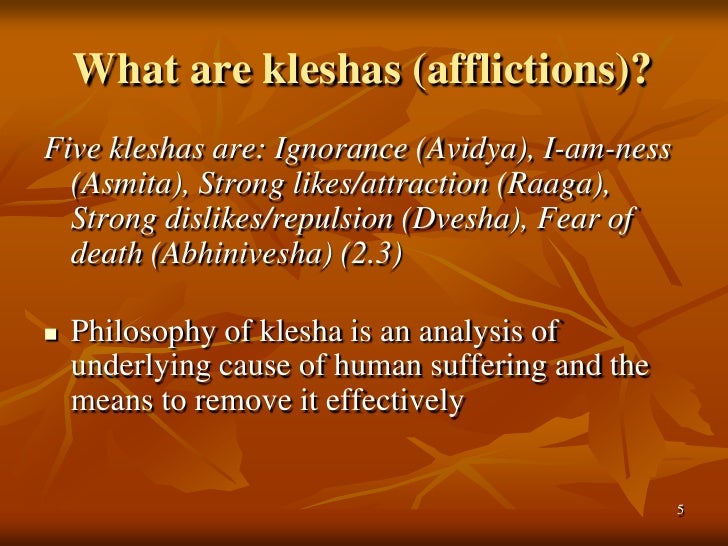 These 5 Kleshas (afflictions) affect (or color) each of the Koshas (sheaths). Kosha a Sanskrit word usually translated as “sheath”, of which there are also five, each one representing a covering of the Atman (“Self”, according to Vedantic philosophy). They range from gross to subtle and are often visualized like the layers of an onion. These Koshas, lie one within the other as a set of five sheaths.

This series of articles will address how each Kosha is affected (or colored) by these Kleshas. But first, for those who are unfamiliar with these 5 Kleshas, here’s a recap.

From the perspective of Patanjali's Yoga Sutras it is important to understand that emotional pain and all its varied expressions, such as depression, stem from the desire, attachment, fear and certain unconscious universal constructs (Kleshas) that exist in all un-liberated human minds. These constructs (referred to as “colorings”) form a basis on which all other more individualized neuroses are woven and re-woven through a complex association of desires, attachments, fears and other human experiences. Thus these Kleshas are basic motivational forces which underpin our ability to act, think, and feel. It is these Kleshas which are responsible for the fluctuations (modifications or agitations) of consciousness and Patanjali’s Yoga Sutras are primarily concerned with the elimination or stilling of these fluctuations.

If and when the Kleshas are removed through yoga practices, all of the individual neuroses which they support will crumble and fall away. These Kleshas (afflictions or colorings) are comprised of five basic constructs or crystallized thought-forms and are described by Patanjali at the beginning of Book 2 of the Yoga Sutras (1, 2, 3 & 4).

Once the Kleshas are seen in a clear light and recognized for what they are, they will disappear. The intellectual mind is not enough to bring about this recognition. Patanjali, insists the “8 limbs of yoga” are necessary to lead the mind toward the required purification and these are:

We all have heard that every journey starts with the first step. So it stands to reason that recognizing the Kleshas is a good way to quench the desire of the intellect. Here is a list of the 5 Kleshas and a brief summary of their attributes:

Stay tuned, next: Further exploration of each Klesha and how it colors each Kosha (Sheath), beginning with Annamaya kosha.