This article is the third of a five part series based on this post: The Eight Limbs of Yoga (Part 2 – Niyama)

The third of the five Niyamas is Tapas – a Sanskrit term meaning “heat”. In Vedic religion and Hinduism, Tapas is also used figuratively, denoting spiritual suffering, mortification or austerity, and also the spiritual ecstasy of a yogin or tāpasa (a Vriddhi derivative meaning “a practitioner of austerities, an ascetic”).

Self training is very important for students and practitioners of Patanjali’s “classical” Yoga (Raja Yoga). Training the senses is a subtler training, as these are the instrument of the mind, acting through the vehicle of the body. Patanjali says of Tapas: “Through ascesis or training of the senses (tapas), there comes a destruction of mental impurities, and an ensuing mastery or perfection over the body and the mental organs of senses and actions (indriyas).” (Yoga sutra 2.43 – kaya indriya siddhih ashuddhi kshayat tapasah)

The Katha Upanishad (III.3-4) presents a metaphor of a chariot, in which the senses (indriyas) are like the horses, the reins are the mind (manas), the driver is the intelligence or intellect (buddhi), the chariot is the physical body, and the passenger is the true Self, the atman. If the senses and mind are not trained, then the horses run in random, uncontrolled directions. With self-training, the senses stay on course, under the proper control of the driver. The Katha Upanishad is also notable for first introducing the term yoga (lit. “yoking, harnessing”) for spiritual exercise: “When the five organs of perception become still, together with the mind, and the intellect ceases to be active: that is called the highest state. This firm holding back of the senses is what is known as Yoga.” (VI.10-11, trans. Paramananda).

Since it comes from the Sanskrit root “to burn,” the word tapas represents the transformational essence of fire. Just as fire transforms all that it touches, tapas is a method of personal transformation. When practicing tapas, the student or Yogi finds his own inner flame which becomes the motivation that keeps him focused on his goals and helps him to eliminate or “burn” the obstacles on his path. Temptations of the senses, laziness, negative thoughts, energy blockages in the body, etc. are gradually weakened and overcome. The power the senses have to distract us is limited by the student’s clear and disciplined focus and in this way Tapas perfects the body and senses and destroys impurities.

Tapas is often regarded as “austerity” but in today’s culture, we generally (and mistakenly) associate the term “austerity” with severe depravation. Although, according to the yoga philosophy, austerity is an opportunity to set ourselves free from distraction. When we discipline ourselves, establishing long-term goals, difficulty can definitely arise; because it is both frustrating and challenging to confront the limits of our own commitment to maintaining self-control. However, when we finally gain the strength and courage to make the commitment, the results are unbelievable. We discover that beyond the end goal of personal transformation, our self-esteem is improved and the realization of our inherent inner strength is our biggest reward. And fortunately, this is a “snowballing” effect; the more often we act in accordance with our convictions, the more we gain self-control and empower a sense of purposeful self-direction.

But beware, austerity and self-discipline can act as two-edged swords, especially if (and when) an individual can be tempted toward extremes of behavior in order to gain recognition and/or notoriety. The Bhagavad Gita specifically warns against practicing austerities “…with hypocrisy and egotism, impelled by lust, and attachment,” stating that this is tortuous for the body, and destroys any divine presence in the body. It also states that the results of such ego-driven pursuits are “unsteady and impermanent.” (Bhagavad Gita, Chapter XVII). For example, consider two individuals who have both decided to change their diets and eating habits. One of them has changed their diet because of an ego-driven desire to be skinnier, to look “better,” become more attractive, more desirable. The other has decided to change their diet in order to have a healthier and happier body, so that they can focus on their highest goals with less distraction from illness and fatigue, or they may do so by observing Ahimsa, eliminating the mental poisons of guilt and regret that comes from killing. These are truly Tapasic approaches.

A simple way to understand Tapas is to think of it in terms of consistency. All disciplines and practices are most effective when engaged with consistency; getting on the yoga mat every day, sitting in meditation every day or carefully observing the constant fluctuations of the mind on a regular basis. Giving up some negative attitude about someone and forgiving them is another effective way to practice Tapas. When Tapas is practiced in this manner, it then becomes subtle and more constant, resulting in a more positive practice that is more concerned with the quality of life and relationships; rather than just enduring some difficulty, like gritting your teeth while trying to remain for another few seconds in a difficult asana (posture).

If Yoga was practiced without goals, there would be no need for Tapas or the other Niyamas. In fact, the very existence of the Niyamas implies the existence of goals; Niyamas are the observances, the disciplines, meant to be practiced consistently to achieve a specific result. Tapas may well be considered pure discipline itself.

Final notes: Without Tapas any journey, especially one that follows a spiritual path will be chaotic and without structure or direction. Tapas essentially adds richness and meaning to the path. With regular and consistent practice, Tapas will make you stronger and more resilient. Both the enlightened Yogi and the most successful entrepreneur have one thing in common – both are infused with the spirit of Tapas. 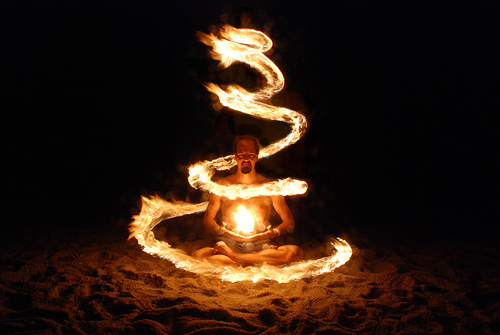 Unleash the fiery enthusiasm of Tapas!

The next article will continue this series with: The Five Niyamas (Part 4 – Svadhyaya)